Scenes from the ongoing anti-superstition campaign of Indian Rationalist Association 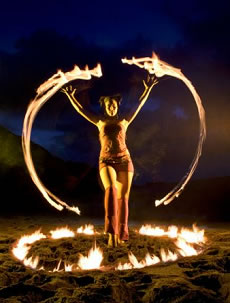 Makkanpur is a village in the north Indian state of Uttar Pradesh, right in the middle of the so-called cow-belt. Flat houses cluster in a vast green plain around a little pink temple. It is a sleepy Sunday afternoon during monsoon season, the sun burns down with all of its dwindling power. Some old men sit in front of the village shop in the shadow of neem tree playing cards and drinking tea. Suddenly they raise their heads. Two unusual guests are slowly coming down the main street. The old men stand up, fold their hands and bow their heads in respect. Clad in shiny saffron robes, a sadhu comes nearer, followed by his disciple. His eyes under thick eyebrows wandering along the horizon, his wild black hair moving lightly in the wind, he looks quite frightening. Barefoot through the mud the holy man and his companion move with measured steps in direction of the village center where women in colorful sari sitting at the water pump washing dishes and children play marmels. The sadhu lifts his hand for a blessing and enters the premises of the sarpanch’s (village head’s) house. Some young men run and bring a charpoi (traditional bed) and place it under a big neem tree in the center of the courtyard. The holy man sits down in the middle of it and folds his legs ceremoniously. Eyes fixed in the clear blue afternoon sky, he does not move anymore. He seems to be in deep meditation.

The news of the sadhu?s arrival spreads fast. Children come from all directions and sit noiselessly down on the boundary wall surrounding the sarpanch?s courtyard. They sit close together, and still more are coming. Meanwhile the adults, too, are gathering respectfully in a wide semicircle in front of the charpoi . After some minutes the whole village population is present. Who did not get a good place in the courtyard, climbs up the staircase and sits on the flat roof of the sarpanch?s house. Among the people who are silently waiting for the sadhu to end his meditation there are also some strangers. They are noticed, but don?t attract much attention. All eyes are fixed on the holy man on the charpoi .

The sadhu arises. Through his disciple he lets the villagers know that a curse is lying on Makkanpur.

To remove all doubts, he makes them see the bad omen with their own eyes. He takes a coconut and throws it down on the stony ground: when it breaks, blood squirts out of it and splashes all around. The audience is awestruck. He has come here, the sadhu lets them know, to use his magical powers to free them from threatening disaster and misfortune. After chanting mantras for a while the holy man breaks another coconut: out come flowers. The audience sighs in relief. Flowers are a symbol of Lakshmi, the goddess of affluence. A child tiptoes forward and takes one of the flowers from the ground, others follow. With this miracle the sadhu has deeply impressed the villagers. He is going to amaze them with more miracles. Sitting in front of a big vessel full of charcoal he chants mantras till flames blaze up, evoked just by his mental powers. He keeps fire on his hands and he eats fire. Between the pages of a big book of Vedic scriptures, he fingers out yellow flowers and green chilies. And he produces lemons from his mouth, one by one eleven lemons appear between his lips and are taken by his disciple and put on the ground in a row. The audience is spellbound. Meantime a TV team has arrived without anybody’s notice and has fixed cameras and microphones and sunfilters. This may be the first ever TV recording in Makkanpur, but nobody cares much about it. The sadhu lies down on a dangerous looking nail bed. He pierces a silver trident through his cheeks. And then he levitates: lying down, covered with a cotton sheet, he slowly raises one meter above the ground and stands there in the air. People hold their breath, there is pindrop silence.

Stop! says a loud voice. A man comes out of the crowd and goes up to the flying sadhu. “This is no holy man!” he tells the shocked audience, “He has no supernatural powers! He cannot do any miracle!” With these words he tears down the cotton sheet. And everybody sees: the sadhu is not flying in the air, he is simply sitting on the ground and holding two hockey sticks in his hands! Spontaneous laughs, the audience gets alive. Before they really understand what is going on, the wrong sadhu is stripped of his wick and his beard. “We are rationalists and we have come here to show you how sadhus and godmen are using some simple tricks to cheat you “, explains the man who has interrupted the show and gets spontaneous applause. He is Sanal Edamaruku, secretary general of Indian Rationalist Association. The sadhu and his disciple are Sunny and Samkhya, two of the many rationalist activists who have been trained to perform all famous “miracles” of gurus and godmen in order to debunk them. The encounter with the people of Makkanpur is part of an anti-superstition campaign in rural Uttar Pradesh, which is already going on since several weeks. It was selected for a documentary film on the work of Indian Rationalists and Sanal had been requested to personally participate in it. He does it with great pleasure, as one sees.

Sanal explains the basics of scientific thinking and the scientific principles that are creating the illusion of some miracles. The fire, evoked by mental powers, was nothing but a chemical reaction that takes some time. If there is a sadhu concentrating and chanting mantras or not: after some time the prepared mixture of chemicals in the vessel is simply bound to burn. And the blood in the coconut? And how could you get all these flowers into the other coconut? One by one the miracles are explained. Sunny produces seven more lemons till everybody understands that all the time there is only one single lemon in his mouth while his assistant drops all the others out of his sleeve. And where is the holy ash kept, which is produced out of thin air? The holy ash has to be prepared with starch and kept in form of little balls, which are to be powdered between your fingers while “producing” them. Sanal distributes some of these little balls and a group of young people starts exercising with them. Did you know that the holy ash is made from cow dung? People laugh. There is an atmosphere of relief and happiness all around. An old lady looks right and left and carefully lifts her veil to see better what is happening. A young man is testing the nail bed, after Sanal explained why it hurts far less to lie on it than to stand on it. People don’t want the rationalists to go before everything is explained and tried out. Many people wish to express their thanks to Sanal. He shakes many hands this afternoon. An elderly man with  wrinkled face embraces him. The cameraman from San Francisco is near sunstroke but does not want to miss any of the exciting and moving scenes. He zooms over smiling faces, takes a close up of the nearly 2000 two-inch long sharp nails of the nail-bed and a bird?s view from the roof top. It is a long afternoon that nobody will easily forget. For many people from Makkanpur is may be a turning point of their life. They had the opportunity to experience that there is nothing behind the authority of holy men but simple tricks and that watching and critical thinking is better than bowing one?s head.

In India, gurus, godmen and astrologers have still an enormous influence on the life of a major section of the population, especially among the 80 per cent living in rural areas. the authority of the supernatural with its many faces keeps them deadlocked in fatalism and resistant against all social changes. Projects like the ongoing campaign in one of the most backward Indian states are the heart piece of the work of Indian Rationalists. Sanal Edamaruku, since two decades leading anti-superstition campaigner, has personally trained hundreds of young rationalists in miracle debunking. He has developed special techniques and strategies to help people to free themselves from the shackles of superstition and blind belief.