The below photo provides solid proof that crop circles are genuine. In addition to the photo, reliable statements from the eyewitnesses Mogens Winther*, teacher at the Danish high school “Amtsgymnasiet i Sønderborg” and 20 members of his astronomy class certify that the crop circle is indisputably genuine and was created by them. They are all ready to testify that they are living in the Universe and as terrestrial beings are aliens – in relation to e.g. Mars and any planet orbiting Alpha Centauri. 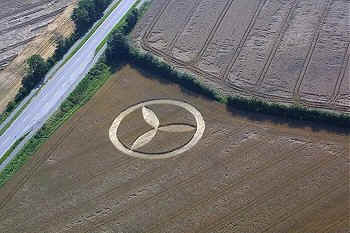 Photo: Lars Søllingvraa (Copyright 2001)
Mogens Winther assures us that neither of his students are green, nor do they have insect eyes or IQs below average. He tells us with a smile: “They are simply in possession of an extra-terrestrial intelligence” – something a self-appointed crop circle researcher has deemed necessary in order to create the (?in)famous and fabled Århus crop circle.

The proof of the college students’ extra-terrestrial abilities was presented on a field near the village Vester Sottrup: A grand copy of the Århus crop circle. There is, however, a significant difference between the two circles. The one from Vester Sottrup has been created on a perfectly legal basis.

The students had been granted permission from the landowner before they turned his grain – almost ready for harvest – into a mysterious giant pattern.

– I don’t believe that the crop circles are created by extra-terrestrial aliens. They are probably the results of boyish tricks, costing the farmer dearly. A calculation of the damages caused by the Århus crop circle shows that it has cost the owner of the field anywhere from 10,000 to 20,000 Danish kroner (US$ 1,200 to 2,500) in lost grain, Mogens Winther says.”

Mogens Winther is not yet prepared to disclose further details of how the crop circle at Vester Sottrup was constructed. He does, however, state that the students didn’t spend much time figuring out how to create it and that the actual work in the field did not last more than an hour and a half. So much for the theories of superhuman intelligence needed for the construction of crop circles.