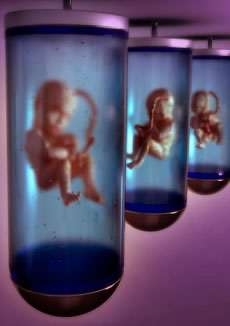 
Clonaid, Raël, and the media seem to have got things backwards, says Paul Kurtz, chairman of the Committee for the Scientific Investigation of Claims of the Paranormal (CSICOP). It should have been science first, publicity second. Without a shred of corroborative evidence, the French UFO cult visionary Raël (formerly known as Claude Vorilhon) and his strange brand of extraterrestrial futurism were catapulted into the world spotlight by the suspect announcement that Clonaid, the human cloning company founded by Raël, had achieved its first success.

Now that it has become clear that the first alleged human clone will not be verified through DNA testing after all, several media watchers are sifting through the smoking wreckage of this crashed media cycle. Kurtz is one of them. In 1997, he debated Raël on MSNBC. CSICOP’s official journal, Skeptical Inquirer, has covered and criticized many the previous claims and exploits of the Raëlians.

Kurtz is distressed by the recent coverage. “It exposes the decreasing standards of many in the media business,” he says. “Here you have an unsubstantiated claim from dubious sources acting on a bizarre agenda, and it makes newspaper headlines and leads cable news for weeks. Coverage for Raël and Clonaid has dumbed down an import scientific issue. Meanwhile, the genuine understanding of scientific issues like therapeutic cloning among legislators and the general public is next to nil, and many in Congress and the Bush administration have been acting to undermine this very type of critical scientific research.”

Indeed, a January 9, 2003, Fox News Channel online story by Liza Porteus announced the introduction of a new Human Cloning Prohibition Act bill in the House of Representatives the previous day. “The bill got a jump start this session,” writes Porteus, “after Clonaid… claimed it had delivered a human clone baby and had three more on the way.” The bill, sponsored by Representative Bart Stupak (D-MI), Rep. David Weldon (R-FL) and 80 other House co-sponsors, would ban both reproductive and therapeutic cloning. This has many scientific groups worried, since therapeutic cloning is a promising technique for replicating specific types of cells rather than an actual embryo. A ban, say researchers, would undermine efforts to find cures for Alzheimer’s and diabetes.

“The media are not serving the public debate by rolling out the red carpet to a pack of ludicrous UFO cultists,” says Kurtz. “Coverage of the Raëlians’ cloning efforts only reinforces an ill-informed public’s Frankensteinian fears.”

Several months ago, Michael Guillen, the former ABC Science Editor who had been organizing the independent testing of Clonaid’s results, was pitching a lucrative reality-based TV program about the cloning efforts to Fox Entertainment and other TV networks, according to the New York Times. Guillen has now publicly distanced himself from the fiasco. Nevertheless, on ABC’s “Good Morning America” (January 8, 2003), Guillen said he was still holding out hope. “I think there’s a small chance [that the claims are true]. And the stakes are so high … that’s why I want to test.” That small chance has gotten far smaller, says Kurtz, with every delay and excuse from Clonaid.

An anonymous Food & Drug Administration official told the New York Times that the company’s cloning facilities were, in many ways, inadequate for the task. A January 1, 2003, story by Kenneth Chang and Gina Kolata quotes the official about conditions at Clonaid’s Nitro, West Virginia, facility. Though the lab-a rented room at an abandoned high school-did have state-of-the-art equipment, “[t]here was no place where sterile conditions could be had.” Insects flew in and out of open windows, possibly from a nearby barn. The research staff at the facility amounted to a woefully unprepared graduate student tracking work on cow ovaries with notebooks “inadequate” to document scientific research. Such testimony casts even more doubt on Clonaid’s ability to pull off what would be one of the great scientific achievements of the 21st century.

At best the Raëlian/Clonaid PR coup will do no damage and fade from public memory. At worst, however, as Kurtz and others fear, the UFO cult’s media high jinks may be contributing to the death of legitimate cloning research in the United States.